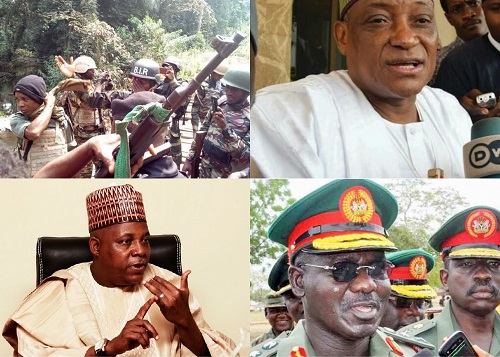 Governor Kashim Shettima of Bornu state, the hotbed of the Boko Haram insurgency has seen it all as Chief executive in seven years of the troubled north eastern state.
He came out with a verdict.

The Defence Minister and top senior security officers have expressed their dismay over the alleged claim by Governor Kashim Shettima that Generals from the Southern parts of the country are responsible for the return of peace in Borno State.

Governor Shettima made the outburst during a town hall meeting of military and security agencies in Maiduguri.

He said he was disappointed to observe that the previous commanders, who are from the southern states of Nigeria, did much better than the last occupants of the office who are from the North.

“Some of our greatest accomplishments in the current counterinsurgency efforts were recorded under army generals who are not from Borno and northern Nigeria. And what we have recorded in the last six weeks outweighs what was accomplished in the last three years.”

He singled out the Commander of Operation Lafiya Dole, Maj.-Gen. Rogers Nicholas, a non-Muslim of Igbo stock for exhibiting leadership and professionalism in the fight against the Islamist extremists.

“Some of our greatest recent feats in the conflict were done by non-northerners and non-Muslim officers in the military. Most of the soldiers that sacrificed their lives are not of the Kanuri ethnic group,” he said.

He further disclosed that the Boko Haram insurgency regained momentum after 2016 because of the failure of command at the theatre of war.

In a swift reaction to the claim, Mansur-Dan-Ali, The Minister of Defence, who was visibly displeased by Shettima’s claim, said other senior security personnel were worthy to be mentioned when talking about the successes recorded.

Dan-Ali said that Major General Ibrahim Yusuf, the present General Officer Commanding (GOC), 7 Division of the army as well as other senior officers from the Nigerian Airforce Component have also played significant roles to the successes.

The Defence Minister said: “The recent Changes in leadership of Theatre Command of Operation Lafiya Dole and the serving brigade, don’t forget we have the brigade commander who is also an indigene of this zone so you should also mention him. General Yusuf is one of the active General Officers Commanding (GOC), in this operation worthy to be mentioned.

“Also the regular visit to the Theatre Command by the Hon. Minister and the Service Chiefs have also given morale to the fighting troops hence recorded these successes. It is pertinent to state that the troops of Operation Lafiya Dole’s in the ongoing Operation Deep Punch II have inflicted great damages to the insurgents and rooted them from their hideouts in Sambisa forest.”

Shettima’s comments have generated outrage amongst military officers and security personnel working in various outfits in the state.

A military intelligence officer who claims anonymity told a Nigerian online source, PRNigeria that Shettima’s comment was quite unprofessional and belittles his personality as Chief Security Officer of the state to use such foul and unguarded utterances against other officers that have risked their lives to protect people of the state from Boko Haram insurgency.

The Officer said: “We are utterly dismayed by the utterances of the governor against other officers from other parts of the country. By claiming that the last six weeks outweigh what was accomplished in the last three years, the Governor is invariably attacking the Chief of Army Chief, General Buratai, the National Security Adviser, General Babagana Monguno who are also from Borno State of failure of their three years in the saddle and equally the Commander-in-Chief who put these people in the positions.

“We must recall that it was during the tenure of the last Theatre Commander, General Ibrahim Attahiru, though from the North but not from Borno State that troops provided adequate security when the State hosted President Muhammadu Buhari to the Theatre during the occasion of Nigeria’s 57th Independence Anniversary and also the successful hosting of Vice President Yemi Osibanjo during his visit to flag off the distribution of relief materials to displaced persons in the North East.”

Another visibly disturbed security officer said “Instead of the Governor to concentrate on the issues related to the town hall meeting, he decided to utilised his remarks by promoting sectional divide and bigotry amongst military men and soldiers fighting Boko Haram.

“We felt exasperated after hearing this insulting and provocative remarks from the number one citizen of a state who is also considered as one of the most active governors in this dispensation. He should note that the Nigerian military and security agencies have no religious sentiment, tribal and sectional affiliations.”

The immediate Theatre Commander, Major Ibrahim Attahiru had disclosed during his handover after seven months in the helm of affairs, that he carried out a quick evaluation of the operational situation resulting in the elimination of five high profile Boko Haram Commanders and hundreds of terrorists after a crucial and swift clearance operations that neutralised identified immediate threats posed by terrorists taking refuge in some remote areas within the Theatre.

General Attahiru also established Fire Support Coordination Cell (FSCC) which were employed continuously to degrade the BHT in their enclaves and staging areas. These FSCC carried out artillery and aerial bombardments in conjunction with the Air Component of Operation LAFIYA DOLE on isolated BHT enclaves killing several BHT and destroying their logistic base.

The creation of dugouts along BHT crossing points also denied the group freedom of action and stemmed the conduct of their nefarious activities.
The inauguration of Mobile Strike Teams (MSTs) reinforced the Mobile Brigade Concept (MBC), while he also set up a Special Forces In-theatre Training Team, for retraining and refreshing troops on the fundamental concepts and skills of marksmanship, convoy and anti-ambush drills among others.

The none kinetic operations conducted through coordinated media and information operations led to the surrender of over 100 Boko Haram Terrorists, who were immediately inducted into Operation SAFE CORRIDOR. The Theatre Command equally facilitated enhanced security on the Lake Chad through continuous clearance of water weeds and patrol of the waterways resulting in lifting of ban on fishing activities in the Lake and the gradual restoration of economic activities thereby providing a lifeline and bringing succour to the indigenes.