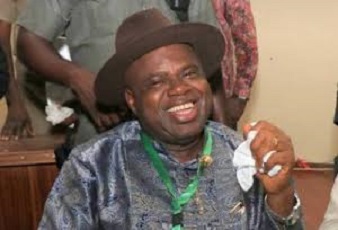 The Bayelsa state governorship election tribunal sitting in Abuja has annulled the election of Duoye Diri, governor of Bayelsa state. The governor who initially was runner-up in the election but less than 24 hours to before the winner, APC candidate David Lyon was to be sworn in, his election was nullified because his deputy had defective credentials and the Supreme Court declared the PDP candidate, the winner.

Lucky King-George, candidate of the Advanced Nigeria Democratic Party (ANDP), had asked the tribunal to cancel the election because he was excluded from the November 16, 2019 governorship poll.

The Independent National Electoral Commission (INEC) had explained that it excluded ANDP from the elections because David Esinkuma (34-years old), the party’s initial deputy governorship candidate, did not meet the age requirement of 35 years to contest in elections.


But ANDP had submitted that Esinkuma was duly substituted within the allowed time frame, following his disqualification by INEC.

The party, therefore, prayed the tribunal to order for a fresh conduct of the poll.

On Saturday, a three-man panel of the tribunal had dismissed three petitions challenging the election on the grounds of incompetence and lacking merit.

But while delivering judgment on another petition on Monday, the panel held that the election was unlawful due to the exclusion of ANDP and its candidate.

Yunusa Musa, the judge who read the judgement, ordered the Independent National Electoral Commission (INEC) to conduct a fresh election in Bayelsa within 90 days.

Diri, candidate of the Peoples Democratic Party (PDP), was sworn in as governor after the supreme court sacked David Lyon as governor-elect 24 hours before his inauguration.

The apex court based its rulings on the premise that Biobarakuma Degi-Eremieoyo, running mate of the candidate of the All Progressive Congress (APC), presented forged certificates to the Independent National Electoral Commission (INEC), according to The Cable report.


However, it is likely that the case would go on appeal and may finally end up at the Supreme Court before the dust would settle.

If the tribunal has ruled that a fresh election has to be conducted, does it also mean that a new set of candidates would be presented ?

This and many more answers would be begging for questions in the next few months as the saga of Nigeria’s elections being decided by judges as it happened in Kogi more than four years ago, in Osun, Zamfara and Imo states where the winner of an election must never be too sure of his victory for the big courts are waiting in the wings, continues.

Existential Threat: The Full-scale, No-holds Barred War Against The Nigerian People And State

OK Computer: To Prevent Students Cheating With AI Text-Generators, We Should Bring Them Into The Classroom