If there is one South West politician especially in Oyo state who should bow down deeply in worship to the Almighty for his phenomenal streak of unprecedented luck, that person should be Abiola Isiaka Ajimobi, outgoing two term governor of Oyo state. God has been so gracious to him. Hitherto, Oyo state would never employ a governor for two tenures, no matter how good he is.

In the case of Ajimobi, his first term tenure was lackluster, unimpressive, uninspiring, yet the people of Oyo state gave him a second term, not necessarily based on his solid personal achievements, but on a sudden gale of what was known as the Buhari Tsunami. Nigerians were just angry with then President Goodluck Ebele Jonathan, but with the benefit of hindsight, many now remorsefully question the proprietary of that wisdom in 2015. Therefore the drowning change mantra swept Ajimobi on the back of the Buhari change domino effect into an unprecedented second term.

Ajimobi went into his second term with huge negatives. He had already shown that he was a poor manager of resources and had driven his State into huge debt. Workers were left unpaid their wages for several months. There was no joy in the hearts of the people, yet they trooped out to vote for him with frowning faces, because one, the main opposition party, PDP did not put it’s house in order. Secondly, a vote for Ajimobi was meant as goodwill to Gen. Buhari.

But on a higher level, it was the heavens above answering Ajimobi’s prayers, going by this BBC World Service Twitter post as they exhumed an Ajimobi prayer that all he ever wanted to was to be the Oyo State governor. And God answered him.
Watch :

#BBCYoruba dug up this timely video of Governor #Ajimobi praying. He said he didn't want any other role than governor.

Well, his prayers were answered, as he lost his bid for @NGRSenate
The power of prayer eh?#NigeriaDecides2019result pic.twitter.com/Di3Ltpxj0H

However, in giving the devil it’s due, it must be recalled that Ajimobi put up some solid infrastructures like the construction of an overhead bridge, and a couple of good roads that some residents consider qualitative, unlike the ones done by a previous governor, Alao Akala that people say started deteriorating shortly afterwards due to substandard construction.

But generally on the management of the state economy, Ajimobi was a disaster. He did not have the sagacity of phenomenal ex governors like Peter Obi of Anambra state. It was also said that he tried surreptitiously to sell assets like schools, etc built by iconic governors in the state, just because he needed money so badly, something he had no capacity to manage. Citizens resisted him stoutly, and he backed down in anger.
But people of Oyo State saw him at his valedictory budget presentation that the most notable monarch, the Olubadan avoided and people were clapping good-naturedly as he tried to change the narrative on the infamy of attempting to sell off under various guises, legacies that raised him up.

For a man who was a Senator, then two term governor, now wanting to transit from being a two term governor back to the Senate again in greed, as if he is the only credible politician in Oyo State, the people made manifest their resentment by voting loudly against him. His cheap and demeaning garri staple and Kulikuli, groundnut cake bribe/ gift failed to save his ambition. After all, are the people of Oyo State so hungry that they would need Ajimobi’s Garri ? They cried at the insult, and all the executive lawlessness in his regime.

The Olubadan, Yinka Ayefele a couple more people would probably be saying, good riddance to Ajimobi. He prayed to be Governor. He forgot to add Senator in the list and he has been answered.

Meanwhile Governor Abiola Ajimobi of Oyo State has congratulated Dr. Kola Balogun of the Peoples Democratic Party who defeated him in the senatorial election.

This was contained in a statement signed by Ajimobi’s Special Adviser on Communication and Strategy, Mr. Bolaji Tunji, in Ibadan on Monday.

Ajimobi, who described the loss of the seat as unfortunate, added that no sacrifice was too much for a leader to make.

“The results of the Oyo South Senatorial District election have been released by INEC indicating that I lost to the PDP candidate.

“I hereby accept the result as announced. Although there were a number of grievous infractions and established electoral malpractices, I have decided to let go in the interest of peace

“If I lose the ticket and the party was able to gain, then it is nothing to feel sad about. APC has done well but we can always do better,” Ajimobi said, according to a NAN report.

Here are some tweets on the electoral saga.

I am terribly disappointed and saddened by the South West results for APC, despite being the biggest beneficiary of this government both in terms of juicy appointments and projects, (they even got a whole new rail line from Lagos to Ibadan) yet, APC narrowly won. Shame! pic.twitter.com/n1X3Sc3HWW

Whatever amenities @APCNigeria created, is not a privilege but a responsibility.

We voted you in, if we think otherwise, kindly move on with the little pride you have.

What a height of entitlement. 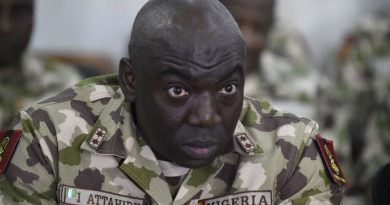 Nigeria Loses It’s COAS, Gen. Attahiru On The 21st Day Of The 21st Year Of The 21st Century In A Plane Crash With 10 Others (Names)

Face Masks Cut Disease Spread In The Lab, But Have Less Impact In The Community. We Need To Know Why