The United States Government has imposed visa sanctions on officials and individuals who have undermined Nigeria’s electoral integrity, sabotaged it’s democracy and robbed it’s citizens of the God-given right to self-determination through free and fair elections.

This action shows that the US followed through on it’s promises and the call for it by pro democracy advocates as well as rights activists both in Nigeria and the diaspora to do so, confirming “the charade of shame that foisted a failed and lifeless regime back on a disillusioned citizenry for another dreadful four years”, according to a press statement issued by the US-Nigeria Law Group, USNLG.

“It is our hope that the principal beneficiary of the stolen mandates will also be subjected to the visa restrictions regardless of diplomatic passports.

Further in our post-election report of 2019, we urged that University academics who acted fraudulently as electoral officers should be similarly banned from sabbaticals and fellowships abroad so as not to export their brand of brigandage outside the shores of Nigeria.

We remind those who took power in Nigeria through a militarized and surreptitious coup against the will of the people that ultimately power belongs to God and that divine intervention can neither be rigged or appealed against.

We urge further that it is not too late to make amends impending elections and in governance”, the statement further read.


The head of the USNLG, Barrister Emmanuel Ogebe equally added his condemnation of the “arbitrary rate hikes in fuel and electricity rates at a time when most of the civilized world is ameliorating conditions for citizens rather than worsening things for them.

We similarly urge the US and allies to ban officials and persons who have justified, funded and otherwise enabled the anti-Christian genocide with impunity in Nigeria.

Finally we condemn the continuing harassment of Dr Obadiah Mailafia for boldly mentioning the information available to him, and discernible by most, by the security services.

Nigerian security forces should focus on the violent perpetrators and not on distinguished academics. Rather than interrogate Benue kidnap kingpin and confessed ex-Fulani militia operative ‘Gana’ when he surrendered, the security forces killed him. Yet he was the only one known to have publicly exposed the tri-state terror master plan of the killer herdsmen and the funding amongst others.

Having intentionally silenced their greatest potential intelligence haul, they’re now straining an Oxford trained academic for intelligence which is nothing short of a travesty that hints at complicity”.


In another development, the US Department of State spokesman, Morgan Ortagus issued a statement titled ;

“The United States is a steadfast supporter of Nigerian democracy. We commend all those Nigerians who participated in elections throughout 2019 and have worked to strengthen Nigerian democratic institutions and processes. We remain committed to working together to advance democracy and respect for human rights and achieve greater peace and prosperity for both our nations. We condemn the acts of violence, intimidation, or corruption that harmed Nigerians and undermined the democratic process. As the Edo and Ondo State off-cycle elections near, we urge all stakeholders, including the Independent National Electoral Commission, the political parties, and the security services, to uphold the tenets of democracy and facilitate genuinely free and fair elections, conducted in an appropriately transparent and non-violent manner.

In a statement on January 24, 2019, the U.S. Government said we would consider consequences – including visa restrictions – for individuals responsible for undermining the Nigerian democratic process or for organizing election-related violence. In July 2019, we announced the imposition of visa restrictions on Nigerians who undermined the February and March 2019 elections. Today, the Secretary of State is imposing additional visa restrictions on individuals for their actions surrounding the November 2019 Kogi and Bayelsa State elections and in the run up to the September and October 2020 Edo and Ondo State elections. These individuals have so far operated with impunity at the expense of the Nigerian people and have undermined democratic principles.

The Department of State emphasizes that the actions announced today are specific to certain individuals and not directed at the Nigerian people. This decision reflects the Department of State’s commitment to working with the Nigerian government to realize its expressed commitment to end corruption and strengthen democracy, accountability, and respect for human rights.” 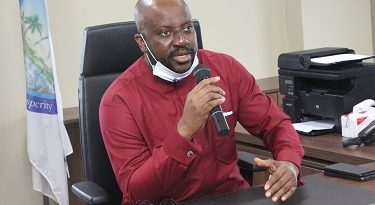