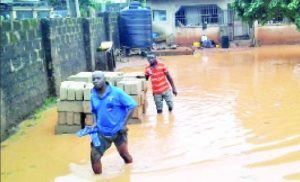 Properties swept away during the six-hour downpour in Ibadan, the Oyo State capital on 20th June, 2017 were officially put at eight buildings, vehicles, motorcycles and household items. Although unconfirmed reports had it that three persons lost their lives in the flood.

The incident brought back the memory of the August 26, 2011 flood disaster.

Several parts of the city were submerged.

The flood destroyed valuables as the torrential rain poured from 3 a.m to 8.45 a.m, making many civil servants to skip work for the day as vehicles could not wade through the deep water that had taken over the roads.

Weep at the carnage.

Berate traders for dumping refuse into both the Orogun and the Ogunpa rivers.

Promise to inaugurate a standing committee to look into planning a “wholistic” way of dealing with the perennial problem of flooding in Ibadan that has persisted for over fifty years.

Seek for ways to get the United Nations agencies in dealing with the menace in his helpless State.

Weep some more and go to sleep.

Until the next flood when he would read the same script and render the same homily.

Most traders at the popular Omi-Adio Market lost their goods; the abandoned Magistrates’ Court was submerged by the flood.

In the Ibadan flood story of 2011 under the same Governor Abiola Ajimobi, the death toll rose to 100 according to PM News of August 29, 2011 although the official figure of the dead, according to government agencies including the police in Oyo State, is 30.

P.M.NEWS reliably gathered that rescue teams working in the areas affected by the flood,  recovered more bodies while a number of people were still missing.

There were cases where entire families were wiped out by the flood and some losing as many as seven children.

Families of the deceased were seen weeping while neighbours were trying to console them.

At the University of Ibadan, UI, staff of the institution’s bookshop and Idea Consult were seen mopping up the flooded premises while relief materials were being distributed at Abbey Technical College, Odo-Ona to the affected victims.

Also, two relief camps were opened at Apete and Odo-Ona as temporary refuge for thousands of displaced victims”.

It was reported that the Oyo State Governor, Abiola Ajimobi, cut short his pilgrimage to Mecca over this.

“Commiserating with the affected victims, Accord Party and Peoples Democratic Party (PDP) called for efforts to be geared towards preventing such incident in future.

A statement signed by the state chairman of Accord Party, Architect Bashir Lawal, called on National Emergency Management Agency, NEMA, and the state government to quickly come to the aid of the victims as their losses were huge.

He also advised people to resist the temptation of building their houses on waterways and drainage channels as the situation was made worse by buildings erected close to drainage channels”.

PDP in a statement signed by its state Director of Publicity, Barrister Morunknola Thomas, regretted the huge loss of lives and property”.

Ask the government what has been done in six years of Governor Ajimobi to put a stop to this menace, one would get this :

“The state government, in anticipation of a flood disaster, spent millions of naira to dredge rivers and streams.

But the water channels overflowed their banks”.

The Ogunpa River channels, dredged in the 1980s during the administration of the late Chief Bola Ige after the Ogunpa flood disaster, spilled over before the rain subsided.

What kind of a government would spend millions of naira annually since 1980 and still have the same problem over and over again?

The simplest thing to spell in Ibadan is ‘Incompetence’. 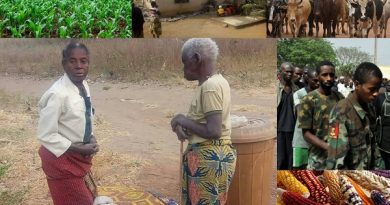 Allegedly Stolen Cows And Fulani Vengeance : Rule Of Law And The Call For Mutual Coexistence 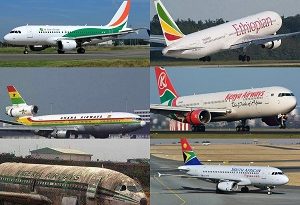 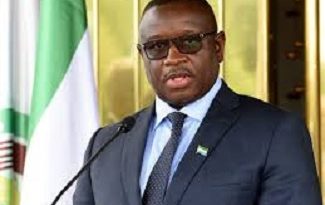