The Edo State Governor, Mr. Godwin Obaseki, has felicitated with Muslim faithful on the Eid-el-Kabir celebration, urging them to continue to imbibe the spirit of love, tolerance and sacrifice as exemplified by the Holy Prophet Muhammad.


The governor, in a statement, charged Muslims to use the period to deepen their relationship with Allah and pray for unity, peace and development of the state and Nigeria.

Obaseki noted: “On behalf of the Government and people of Edo State, I felicitate with Muslim faithful on the occasion of Eid-el-Kabir.

“This year’s Eid-el-Kabir presents yet another opportunity for our Muslim brothers and sisters to deepen their relationship with Allah.

“As we celebrate this auspicious occasion, I call for dedication to the virtues of love, oneness, patriotism, tolerance and unity for the desired development in the state and Nigeria.”


In an earlier development, the Edo State Government, on Monday, paid July 2021 salaries and pension to workers and retirees in the state, as part of commitment by the Governor Godwin Obaseki-led administration to workers’ welfare.


In a statement, Secretary to the State Government, Osarodion Ogie Esq., said the early payment of salaries and pension will support Muslim faithful in the state to celebrate the Eid-el-Kabir festivities.


He said, “The Edo State Government has paid the pension and salaries of workers for the month of July, 2021. It is part of the state government’s gesture to identify with Muslim faithful for the Eid-el-Kabir celebrations.”


He added that the state government will continue to prioritise the wellbeing and welfare of workers in the civil service, in line with the Obaseki-led administration’s policy of meeting its statutory obligation well before the end of the month.


Ogie urged the workers to reciprocate the gesture by remaining committed to their duties and roles in the actualisation of the ‘Making Edo Great Again’ agenda. 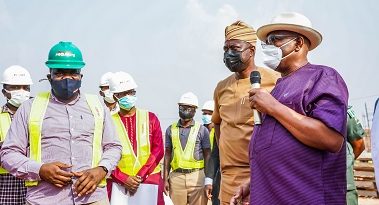